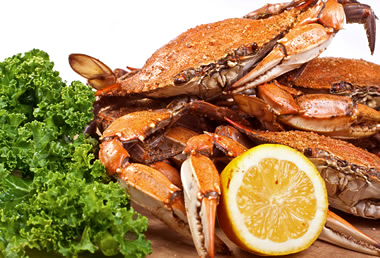 Among the most delicious shellfish in the region is the Blue Crab. They are closely related to shrimp and lobster, and are known as the pride of the Chesapeake Bay.

Blue crabs are true crabs. They are quick to use their sharp front pincers when threatened. The blue crab has specially adapted hind legs shaped like paddles which make crabs excellent swimmers

The average live span of a blue crab is one to four years. They can weigh from one to two pounds.

Blue crabs are found in brackish coastal lagoons and estuaries from Nova Scotia, through the Gulf of Mexico, and as far south as Uruguay. Blue crabs are extremely sensitive to changes in their habitat and environment. Constant over-harvesting has caused wide-ranging negative effects on the eco-systems they inhabit. Blue crabs are opportunistic feeders, and they are important in managing the populations of their prey. They will consume mussels, snails, fish, plants, carrion, and even smaller soft-shelled blue crabs.

The female blue crab is easy to distinguish from the male, as it has red-tipped claws. Females stop molting after 21 to 22 molts. During the last molt, mating occurs. A female blue crab will mate only once in her life.

Male blue crabs can reach 9 inches in shell width. Males will grow and molt throughout their lives. The male's abdomen is long and slender, and resembles an inverted T.

In early stages of molting, the crab is forming a new, soft shell under the existing hard shell. Molting hormones are released, and the layer of cells beneath the shell (the hypodermis) detaches from the existing shell. The hypodermis produces enzymes that dissolve the existing shell. During all this, the new soft shell is forming. This first stage of molting is called precdysis, or the peeler stage. During the second stage, called ecdysis, or the busting stage, the crab stops feeding and seeks shelter to avoid predators. The crab absorbs water at a high rate, which splits the old shell along the back and at the claws. At this point the crab backs out of its old shell. The crab then pumps water into its new shell, inflating it to its new, larger size. The new shell will be fully hardened in two to four days.

Crabs can deliver an extremely painful pinch and are noted for being particularly aggressive – even out of water – and can be difficult to handle safely.

For more information about what ProShuckers can do for your next party, e-mail or call Steve at 443-520-0729.